According to Newtonian physics, kinetic energy is:

The energy possessed by a body because of its motion, equal to one-half the mass of the body times the square of its speed.[8]

If \({E_k}\) is a unit of energy, then equation (\ref{Ek}) is not a true equation because the two sides do not equal each other. The left side would have twice the value of the right side. Kinetic energy is therefore not a unit, but rather a component of an equation removed from its true context. A proper equation using kinetic energy is:

Thus, kinetic energy is just half the energy transaction.

Symbolically, the paycheck is kinetic energy. Kinetic energy is tangible, as it is the work done. The employee’s accrued wages could be symbolic of potential energy. The potential energy is intangible, being unusable. In the transaction, the total change in wealth is symbolic of total energy. The fact that the employer’s wealth decreases by \$300 and the employee’s wealth increases by \$300, thus the economy has a net gain of zero dollars, is indicative of the conservation of energy law.

According to the standard explanation of kinetic energy, it has no direction, being a scalar quantity. Nevertheless, since dimensions comprise all units, and since dimensions have a more primary nature than units, the units must obtain their characteristics from the dimensions.

Similarly, kinetic energy is always associated with moving objects, such as electrons, photons, or the swinging balls of Newton's cradle. The kinetic energy of the object is merely the instrument of the energy exchange between the objects. As in the financial transaction, the total change of energy state is equal to twice the kinetic energy.

One might ask, “What does the employee care about the employer’s wealth decreasing by \$300?” After all, the employee earned the paycheck and the employer has marketable goods available to sell at a profit.

The significance of tracking the wealth of both the employer and employee is the monitoring of the conservation of cash. The conservation of cash is important to the economy in which the transaction takes place. If employers wrote checks for \$300 but employees cashed the checks and received \$450 per check, then the banks processing the checks would ultimately collapse. Maintaining the conservation of energy in our physics transactions is just as important, not because the Universe would collapse, but because the Universe will not allow it to be otherwise.

Let us assume an object with mass of 1kg hangs a distance of 10m above the Earth. The gravitational acceleration constant of the Earth is \(g = 9.8066\frac{m}{{se{c^2}}}\). The potential energy stored in the Earth’s gravitational field in relation to the object is then:

The mass of the Earth is \(5.98 \times {10^{24}}kg\). Since the falling object travels nearly all the distance, we can calculate the distance that the Earth will traverse as:

which is the conservation of energy.

When the two objects collide, the energy phases reverse polarity. If the collision were perfectly elastic, the positive phase kinetic energy, made negative at the collision, would again reverse phase with a negative acceleration and negative kinetic energy. The result would be a positive phase kinetic energy with a change in direction of motion. Even the Earth experiences recoil, but due to its enormous mass compared to that of the falling object, it is on the scale of \({10^{ - 24}}m\), which is considerably smaller than the quantum length. The recoil is extremely small, but it cannot erase from the physics.

With all the balls at rest, the energy needed to raise the first ball and start it swinging will exactly equal the total energy lost due to friction as the balls eventually work back to the rest state.

where \({{E_f}}\) is the energy lost to friction. In other words, the frictional loss is exactly equal to the kinetic energy that dissipates from the system.

Equation (\ref{potnenrg}) is the correct form for the potential energy equation since the energy phase is negative with respect to kinetic energy. The height is negative because length has direction and the ball moves away from the Earth.

The moment the first swinging ball strikes the next ball in line, the first ball switches energy polarity with the next ball, which then collides with the middle ball while the first one comes to rest. Since the distance between the second and the middle ball is zero, the energy polarity instantaneously exchanges between them. The middle ball has the same exchange with the fourth ball, and the fourth ball has the same exchange with the ball on the opposite end, which, because it is the last ball, retains the positive energy, transferring it to the gravitational field as the ball moves up and away from the Earth.

As the positive kinetic energy exchanges from ball to ball, and as the end balls move through the air, the balls give up some of the positive phase kinetic energy in the form of friction, similar to a free falling ball striking the Earth in an inelastic collision, but spread out over time.

and therefore it is assumed that:

which is an unbalanced equation.

Another argument used by the Standard Model to incorrectly imply that the Earth has zero kinetic energy is to present the equation:

The tiny amount of kinetic energy developed within the Earth is nothing more than a distraction that has no bearing on the transfer of potential energy from the Earth to the kinetic energy of the impacting object.

Jean Bernard LeonFoucault investigated eddy current in the early 1800s. Eddy current is a unit that appeared as early as 1922[4]. For some reason though, scientists either ignored or lost its unit definition. Eddy current is an important unit and in Quantum Measurements Units is equal to magnetic flux squared.

Eddy current also has other expressions and relates to Ohm’s law. According to the Aether Physics Model, eddy current is also equivalent to angular momentum times resistance:

Eddy current is equal to inductance divided by capacitance:

Significantly, eddy current is equal to Aether per curl:

Another observation of interest is the relationship of eddy current to magnetic field:

According to many experts, eddy current is a complete path electrical current that flows through the conductor as the magnetic flux changes.

According to a web site by Dr. James B. Calvert[6]:

"A magnet produces a pure magnetic field in its rest frame. Anything moving with respect to the magnet sees an electric field in addition to the magnetic field that is roughly proportional to the relative velocity. An electron free to move, as in copper, will be set into motion by the electric field it sees.  ...  This current is called the eddy current, since it flows in closed loops in a conducting plate like eddying water."

Dr. Calvert goes on to describe the physical eddy current within a copper tube. A neodymium-iron-boron (NIB) magnet drops through. "The magnetic field passes through the tube walls at top and 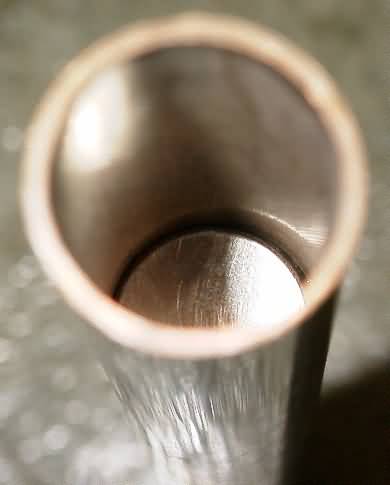 In an effort to test this theory, we dropped a NIB magnet down a copper tube. The magnet was 1" in diameter and nearly ¼" thick.

As the magnet dropped, it dropped at a much slower velocity than it would in free space, as Dr. Calvert explained it would.

The plane of the magnet was almost perfectly perpendicular to the length of the tube during its descent.

To test the theory we slit a section of copper pipe along its length, thus preventing any current flow around the periphery of the tube.

We then dropped the magnet into the slit tube. If the eddy currents were propagating through the periphery of the tube, they would not form in this experiment and would drop straight through. 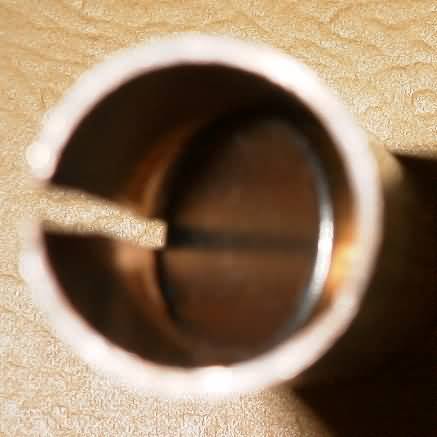 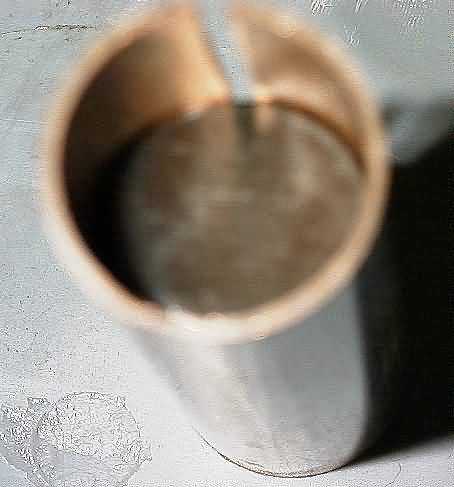 But as shown in the photos on the left, the magnet still dropped through at a slow rate, although slightly faster than the rate of drop through the un-slit tube. In addition, the magnet did not fall perpendicular to the length of the tube. Instead, it fell with a noticeable tilt toward the slit. 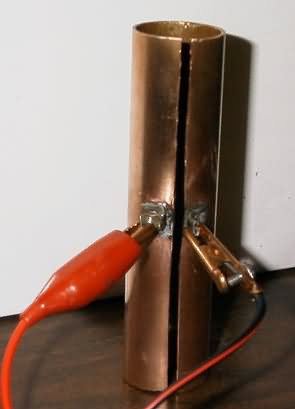 Nevertheless, the angular momentum in the atoms along the path of the magnetic field still contributes to eddy currents and thus this portion of the magnet tends to fall slower. This results in the tilt of the magnet as it falls.

We attached an HP 34970A data acquisition switch with a built in digital multimeter to test for resistance. Two terminals were soldered mid-length, one on each side of the slit as in the image to the right. We cleaned the terminals to assure a good contact.

The magnet dropped down the tube while measuring resistance at the terminals. Several tests ran with each test producing the same graph, as shown below.

The preliminary conclusion is that eddy current is an actual unit of electrical behavior. The current produced is within each atom and not within the macro structure of the atoms (copper tube in this case), at least not under normal conditions. The properties of angular momentum and resistance are capable of interacting to produce a combined effect that we call eddy currents.

This, of course, is not the standard explanation for eddy current. The normal explanation is that the magnet generates a potential on the leads, and thus the ohmmeter, expecting no potential, is “fooled” into seeing less (or more) resistance. This is, of course, true, as measurement does show an increase in potential at the edges of the pipe as the magnet passes by. However, the induced potential reacting to the inductance of the copper is also a way of seeing eddy current, as in equation (\ref{eddy3}).

We will repeat the slit tube experiment for eddy current above, but with 1½” pipe and 1½” magnet. The length of the pipe is 11.875” (30.162cm) and the magnet is .375” thick with a .5” diameter hole. The data screen below represents the resistance of the pipe at the terminal while the magnet drops through the slit tube.

The markers are the green vertical lines in the graph and are set at precisely the moment before the magnet drops and immediately after the magnet stops moving. The connections from the HP34970A DAQ unit are simple 2-wire setup since we are only looking for a general picture of the action. 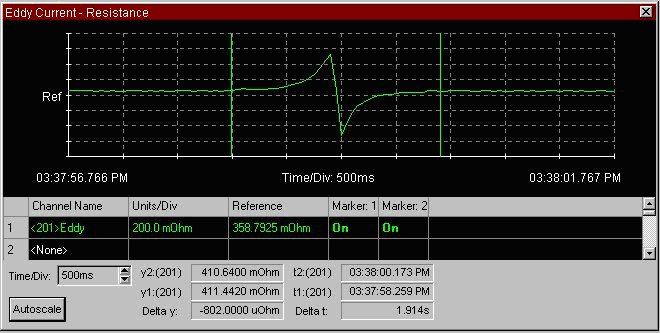 The mean resistance from the moment the magnet started falling to the maximum resistance was \(620m\Omega \), so we can calculate the average drag during that interval. First, we need to convert the unit of \(\Omega \) to the unit of \(resn\) by applying the charge conversion factor to the different charge dimensions. Since resistance has charge to the fourth in APM units and charge squared in MKS units, the charge conversion factor must be squared:

The total averaged electrons dragged at any moment along the magnet’s fall are:

The \(mfld\) unit is the Aether unit, but without accounting for its rotation. Therefore, the unit of \(mfld\) is equal to a unit of Aether. As the magnet falls from the start position to the point of maximum resistance, at any given moment along the fall it involves the action of an average \(1.4 \times {10^{6}}\) dragging electrons and \(1.4 \times {10^{6}}\) Aether units.

Of course, a test of the accuracy of this exercise would be the magnet’s magnetic flux measurement, which is not available at the time of this writing.

Secrets of the Aether