(2) the mechanical difficulties, however, which are involved in the assumption of particles acting at a distance with forces which depend on their velocities are such as to prevent me from considering this theory as an ultimate one, though it may have been, and may yet be useful in leading to the coordination of phenomena.

I have therefore preferred to seek an explanation of the fact in another direction, by supposing them to be produced by actions which go on in the surrounding medium as well as in the excited bodies, and endeavouring to explain the action between distant bodies without assuming the existence of forces capable of acting directly at sensible distances.

Maxwell proposed that instead of action at a distance, there must be a structure to the surrounding medium, which carries forces.  This structure exists in both space and particles.

(3) The theory I propose may therefore be called a theory of the Electromagnetic Field, because it has to do with the space in the neighbourhood of the electric or magnetic bodies, and it may be called a Dynamical Theory, because it assumes that in that space there is matter in motion, by which the observed electromagnetic phenomena are produced.

(4) The electromagnetic field is that part of space which contains and surrounds bodies in electric or magnetic conditions.

In the Aether Physics Model, each quantum particle quantifies as an Aether unit encapsulating primary angular 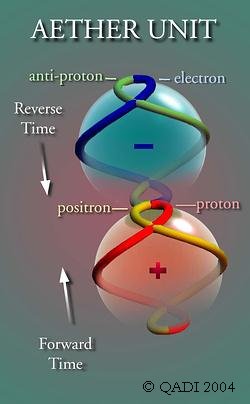 momentum. The Aether unit is the source of charge for the particle, but also the empty Aether units surrounding the particle still contain electric and magnetic dipoles as seen in the image to the right.

As explained in the APM, the double loxodrome structure represents the electromagnetic charge, while the + and - signs represent the locations of spherical electrostatic charge. Maxwell and his contemporaries did not recognize that magnetism and electrostatics each existed as the result of two distinctly different manifestations of charges.

For more information concerning the structure of the quantum Aether unit see our paper, A New Foundation for Physics, and our book, Secrets of the Aether.

It may be filled with any kind of matter, or we may endeavor to render it empty of all gross matter, as in the case of Geissler's tubes and other so-called vacua.

There is always, however, enough of matter left to receive and transmit the undulations of light and heat, and it is because the transmission of these radiations is not greatly altered when transparent bodies of measurable density are substituted for the so-called vacuum, that we are obliged to admit that the undulations are those of an aetherial substance, and not of the gross matter, the presence of which merely modifies in some way the motion of the aether.

Maxwell clearly understood the Aether to be non-material in that it was not gross matter. He also understood that matter must be capable of modifying the Aether. These assumptions are quantified as actual properties of the Aether in the APM.

We have therefore some reason to believe, from the phenomena of light and heat, that there is an aethereal medium filling space and permeating bodies, capable of being set in motion and of transmitting that motion from one part to another, and of communicating that motion to gross matter so as to heat it and affect it in various ways.

Heat is a concept not well understood in modern physics. This is because modern physics has not yet identified heat as a phenomenon that occurs at various levels of reality. For example, there is heat of onta (subatomic particles), heat of atoms, and heat of molecules. Heat is defined in the APM as a unit equal to velocity squared meaning that heat is a distributed velocity, or an expanding-contracting condition. Explosions and implosions are extreme manifestations of heat. In the expanding-contracting condition, heat manifests as particles bouncing against each other. The topic of "velocity squared" is explained in greater detail in Secrets of the Aether. 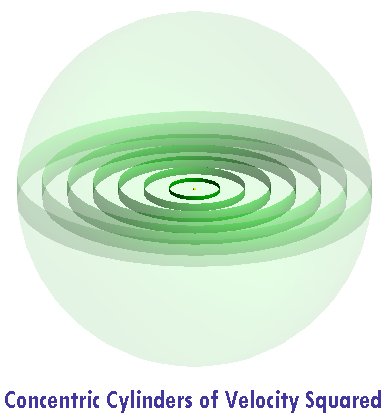 From these conditions Professor W. Thomson has argued3, that the medium must have a density capable of comparison with that of gross matter, and has even assigned an inferior limit to that density.

(6) We may therefore receive, as a datum derived from a branch of science independent of that with which we have to deal, the existence of a pervading medicum, of small but real density, capable of being set in motion, and of transmitting motion from one part to another with great, but not infinite, velocity.

Secrets of the Aether